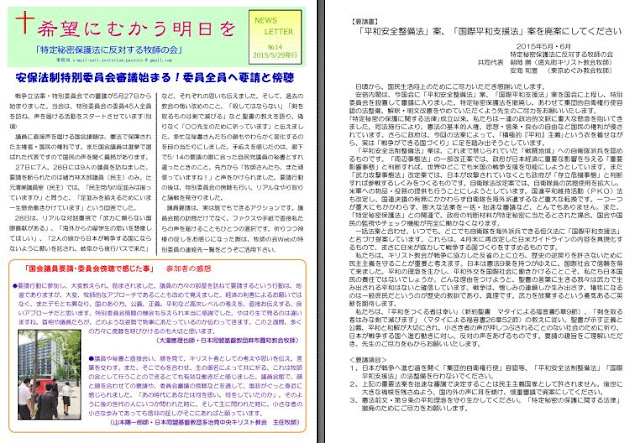 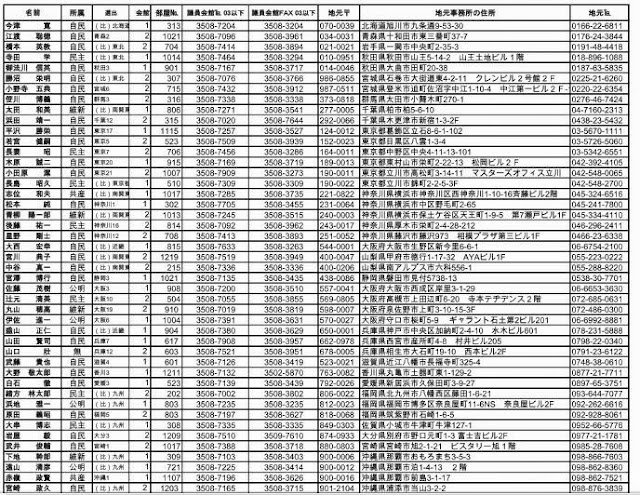 
STATEMENT AGAINST THE CABINET DECISION ON SECURITY-RELATED BILL

Today, the Abe Cabinet decided to approve the Security-Related Bill, which is counter to the pacifist policy of the existing Constitution and the many voices of Japanese citizens. Therefore, we, the Pastors’ Association for Peace and Justice, express a serious sense of danger as well as great concern regarding the cabinet’s decision on the Security-Related Bill.
The Abe Cabinet, since its inception, has been trying to overturn the peace policy that Japan established based on the regrets about the past War. Ultimately, the Bill attempts to alter the current law towards one that could throw this country into warfare once again.
Concretely speaking, the following bills will be amended by the Security-Related bill: “Self -Defense Forces Law Reform Bill,” “Armed Attack Situation Revision Bill,” “Ship Inspection Revision Bill,” “Marine Transportation Regulation Revision Bill,” “Captive Handling Revision Bill,” “Specific Public Accommodation Reform Bill,” “The PKO Cooperation Method Reform Bill,“ National Security Council Setting Reform Bill.” Additionally, combining “ Important Situation Bill,” which is a revision of the Emergency at Periphery Law, and “ US Army Action Facilitation Bill,” which is a revision of the United States Armed Force Facilitation Act to create the “Peacefully Safe Legislation Bill” and “International Peace Support Bill” as a new perpetual law. These are very important laws that immediately relate to national security of Japan. Each of these laws need to be separately and thoroughly reviewed and discussed before making any decisions. Decisions should never be made forcibly by the majority with the power of number at the end, which has happened in the past for important bills.
For example the Abe Cabinet launched the “Right of Collective Defense Use Acceptance” disregarding the voices of citizens against it. This led to many people, including local assemblies, historians, journalists, religious leaders, mothers, and young people, raising opposition voices against such actions.
However, the ruling party has ignored the voices of the citizens and promoted bill amendments that build towards the war state of Japan. Today’s decision on Security-Related Bill only goes towards proving that point. Meanwhile, the Abe Cabinet forcibly removed Okinawan citizens as they clearly expressed their negative response to the plan for a new US Base in the Henoko area. Lately, the Abe Cabinet also decided on the deployment of Osprey to the US Yokota Base. This flattering attitude of Abe Cabinet following the US and heading towards becoming a war state is quite abnormal, and was represented in the speech by Prime Minister Abe at the US Congress.
The Abe Cabinet is trying to establish the Security-Related Bill due to the need for the oil resources in the Middle East as well as the rise of tension within East Asia. However, we will continue to appeal what is most needed is not increasing the number of military horses (Old Testament, Deuteronomy 17:16), but changing the sword to a spade, spears to sickles, and never learning how to battle (Old Testament, Isaiah 2:4). We believe that true peace is possible when we pursue the vision for peace and determine to realize it by standing on the Word. Even though our strength is limited, we are determined to pursue true peace, love for our neighbors, and the Gospel of reconciliation by prayer.
Seeking for the mercy of the Lord.
Head Office of The Pastors' Association for Peace and Justice
投稿者 教会と政治フォーラム 時刻: 13:31 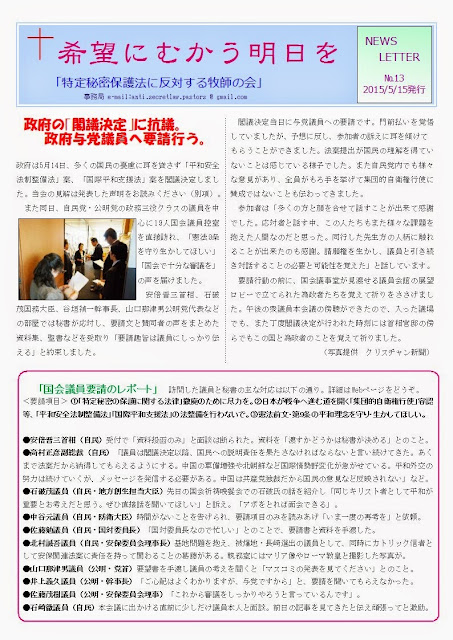 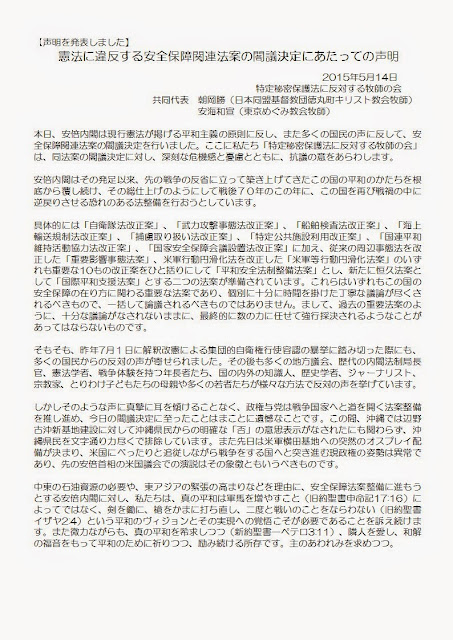 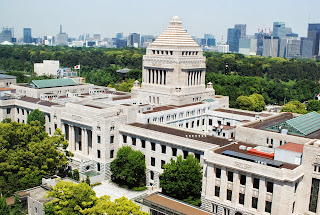